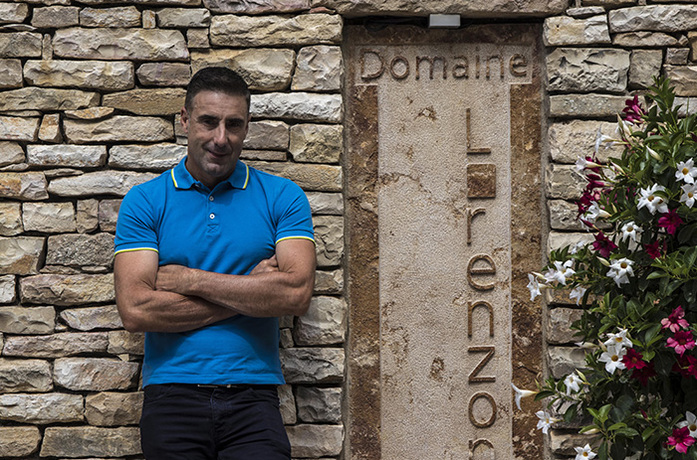 I vividly remember my first tasting with Bruno Lorenzon. His wines’ textural seamlessness, complexity and concentration without weight set a new standard for Mercurey. But more than that, they demonstrate just what great vineyard sites in less-celebrated communes can achieve when they are farmed and vinified with the same care and attention that’s typically lavished on only the region’s grands crus. Like the wines of Vincent Dureuil in Rully or Jean-Marie Guffens in the Mâconnais, Lorenzon’s oeuvre represents a glitch in the appellation hierarchy’s matrix, revealing that this hierarchy is reinforced more often than it is simply revealed. In this respect, these wines are not merely excellent, but also thought provoking and indeed inspiring.

In the immediate aftermath of that first visit, the Anglophone press’ near-total silence concerning Lorenzon’s wines perplexed me as much as their quality had impressed me. How could such good Burgundies go largely unremarked upon? But the reality seems to me that consumers, importers and journalists alike find the appellation hierarchy a convenient crutch. For the trade, the purpose of a Mercurey is all too frequently to occupy the price bracket in between a Bourgogne and a Gevrey Village on a wine list. Being both comparatively expensive for their appellation and remarkably good, Lorenzon’s wines sit uneasily with such an approach. And for consumers and critics alike, a Burgundy where wines don’t always “know their place” is immeasurably more complex and less comfortable than the reassuring world of the time-honored status quo.

I’ve written at length in these pages about how regions such as Mercurey have long suffered from a vicious cycle whereby negative consumer perceptions impose low prices, encouraging producers to privilege quantity and cash flow over quality, resulting in mediocre wines that reinforce those negative perceptions. No one has done more to break that cycle than Lorenzon, whose vineyards today are a model of excellence that would excite admiration anywhere in Burgundy.

His parcels throughout Mercurey are easy to recognize. Judiciously timed cultivation disrupts weed competition while maintaining vegetative cover when it’s needed to protect the soils from erosion, elevated temperatures and dry conditions alike. High canopies, attaining some 170 centimeters, shade both grapes and the soil, enhancing water retention and favoring smaller, more-open clusters. Plantings at 20,000 vines per hectare, double the standard in the Côte d’Or, deliver enhanced concentration and phenolic maturity at moderate sugar levels. And needless to say, Lorenzon has worked with a variety of rootstocks and high quality massale selections to improve his parcel’s genetic makeup. All this demands some 750 manhours per hectare of work during the growing season.

This finely tuned system is the fruit of a long career. “In the 1980s, my father told me to leave Mercurey and do something else—to travel and see the world,” Lorenzon reminisces. Working as a barrel broker for Tonnellerie Mercurey, as well as a consultant in New Zealand and South Africa, he did just that. But he was drawn back to Burgundy. “Working with my father, I made a 1993 that turned out very well and got a bit of attention,” he remembers, “but it wasn’t until 1997 that I took over the domaine officially. That was the first vintage where anyone had seen sunburnt grapes, which made me think to adopt the higher canopies I’d seen in the New World.”

Evolution followed evolution. Soon grapes were being harvested in small six-kilogram cases and transported to the winery in a refrigerated truck. At the outset, Bruno’s red wines were made with some three-quarters whole bunch and saw a long maceration in cement tanks: today, macerations remain long, and the percentage of whole bunch remains elevated, but fermentation temperatures are kept low, precisely controlled in stainless steel tanks, and the wines are no longer chaptalized under any circumstances. “The raw materials are better, and we extract less aggressively,” he explains. White wines see an unusually long four-hour press cycle (many consider two and a half hours long) to extract from the skins and generate solids, with Lorenzon as interested in the lees’ constituents as their quantity. Élevage is long. For both colors, Bruno makes his own barrels, commandeering the facilities of Tonnellerie Mercurey and using wood he has selected and seasoned himself. Percentages of new oak are lower than in the past, of course; but more importantly, these barely toasted barrels are intended to bring precision and structure rather than richness and aromas to the wines, and they achieve their objectives remarkably well. Countless other details and techniques have been refined over the years too, with rigor and precision as the domaine’s watchwords.

It was to explore Bruno’s body of work more completely, as well as to chart his evolution of a winemaker and the evolution of his wines over time, that I proposed this vertical tasting, stretching back to the very beginning of his career. The results were fascinating. It’s clear that these wines have been good from the beginning, but a noticeable step up in precision and energy was evident in the 2007–2012 era, followed by incremental progress year in, year out—reflecting work in the vineyards and the cellar alike. Today, Lorenzon is at the peak of his career, and his 2019s as a set are his finest wines to date. But there were so many cuvées in this tasting that I would be delighted to own that its consequences have already been costly for my personal purchasing. I suspect that readers who taste some of these wines for themselves will have the same experience.